Casino slots always try to create a draw. Essentially, they do the same thing and are operated the same way. So there has to be something that sets them apart from similar machines. Many slots go the way of theme, using spectacle to reel in potential gamblers. The same goes for online slots as well. Thematic slots can be very fun to play, almost hearkening to the feel of a video game. Here is a list of muscly-themed slots designed for the music loving gambler.

Michael Jackson – King of Pop tributes Jackson and has his iconic music playing in the background The King of Pop contains 5 reels complete with 25 paylines. The first bonus found in the game is Jackson moonwalking across the reels dispensing wilds. The second bonus turns two random reels into wild reels. Both are activated during normal play. The third bonus brings about a prize reel. This is activated buy the Bonus symbol. The prize reel offers the following: 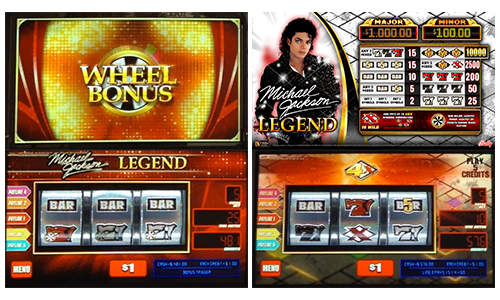 Inspired by Dolly Parton and containing a lot of her music, this machine can be found at Leander games. It has five reels and 40 paylines. The wild symbol is a gold record but Dolly herself is also wild and an expand into its own combo. It also contains butterfly extra wild which dispatches butterflies across the screen dispensing wilds. Matching three gold records brings about the prize wheel which offers these bonuses:

Obviously for the hard core rocker. Inspired by KISS and containing hit songs. It is the first on the list to have Colossal reels. Contains 5 reels with 100 paylines, split up into two games of 5×4 reels. The KISS band members are featured as symbols on the reels with high payouts for matching the whole band. Bonus features are activated when three bonuses are matched. It offers the following:

Very similar to the Dolly Pardon game but Elvis-ed up. Contains the same expanding wilds, scatter wild feature, and gold album wilds. One difference is it contains jukebox symbol which active jukebox jive mini-game if three are matched. Also three gold albums activate an Elvis wheel that awards the value it stop at. It does not contain the mini-games that Dolly Pardon does.

Inspired by the band’s 30th birthday and containing loads of special features. Contains 5 reels with 20 paylines but as yet has not been released. For this reason details are rather slim to come by.

Here are some of the features that have been released:

A Few Tips To Up One’s Online Gambling